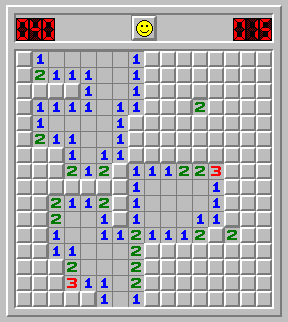 Did you play the original windows minesweeper game and get a little bit addicted? You remember the game where you had to avoid the mines and click on all the empty to squares to finally reveal a smiley face? This old school retro game has made a comeback in the Bitcoin world! There is currently over 6 Bitcoin Minesweeper games available to chose from!

So what are the Top Bitcoin Minesweeper Sites?

We are big fans of Bitcoin Minesweeper sites at BGR, so we decided to run a poll on the bitcoin talk forum. With the voting poll having lots of comments, over 1200 views and 51 members voting the results are below, with the favourite being Coin Sweeper followed by www.satoshimines.com

Below is a screenshot of the polling results from the bitcoin talk forums:

Coin Sweeper is a new retro Bitcoin Gambling Game that is a unique, extremely fun and a nice change from all the dice games that have been launched recently. Coin Sweeper has some of the best odds in the Bitcoin Gambling world with only a 1% house edge. The game works by the player clicking on a square on the grid, and if the player does not hit a bomb they are paid a sum on top of their wager. However, if they hit a bomb they lose their entire wager. The game play is simple but you very quickly get hooked into the game play as you avoid the bombs collecting more and more coins. With each game you can potentially win 1000’s more than your initial bet if you can collect enough coins before hitting a bomb!

The anonymity is very strong as Coin Sweeper does not require any information aside from your Bitcoin wallet when you want to withdraw Bitcoins. We have been in contact with Coin Sweeper via their customer service email address and had a response within 2 hours. Additionally, they have a presence on the Bitcoin Talk Forum answering any concerns players may have.

If you want to go directly to Satoshimines click here