36eyes is a new Bitcoin based game to enter the online gambling space. They offer a simple, user friendly interface as well as fast deposits and withdrawals.

The popularity of Bitcoin brought about quite a few use cases for the digital currency. From marketplaces to equities, and from value transfer to commodity storage, the world’s first cryptocurrency has seen a variety of scenarios where it could be put to good use by its holders.

Once such a sector that has seen Bitcoin become an integral part of its day to day operations is online gambling. Whether it is a web-based dice game or an old fashion roulette, several gambling facilitators offer solutions that could curb the needs of gambling aficionados from almost all walks of life.

Given the popularity of this segment, various new sites keep popping up that keep offering similar solutions with their own spin to it. They sometimes offer the same game of slots with variable graphics or get to introduce card-based games where the only difference gets to be the design of the deck.

36Eyes.com is one of many similar platforms that tries to set itself apart by mixing Bitcoin gambling with the mysteriousness of ancient Egypt. While an interesting solution on paper, whether it works or not is a story on its own.

To answer this question and find out whether the game does deliver on the promise that it builds through its setting, we went ahead and tested it out ourselves.

And since we couldn’t just keep the findings to ourselves, we have put together a detailed review of the game so you may get to know what it is about before you get your hopes up.

36Eyes – A Game With Great Potential But Staggered Delivery

The website takes some time to load although the dancing graphic of the halfway-done mummy is amusing. 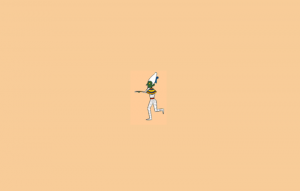 Thankfully, the game loaded for us after attempting a few times, and what we saw in front of us was an interesting set of graphics that was complemented by a pleasant thematic music. So far so good. 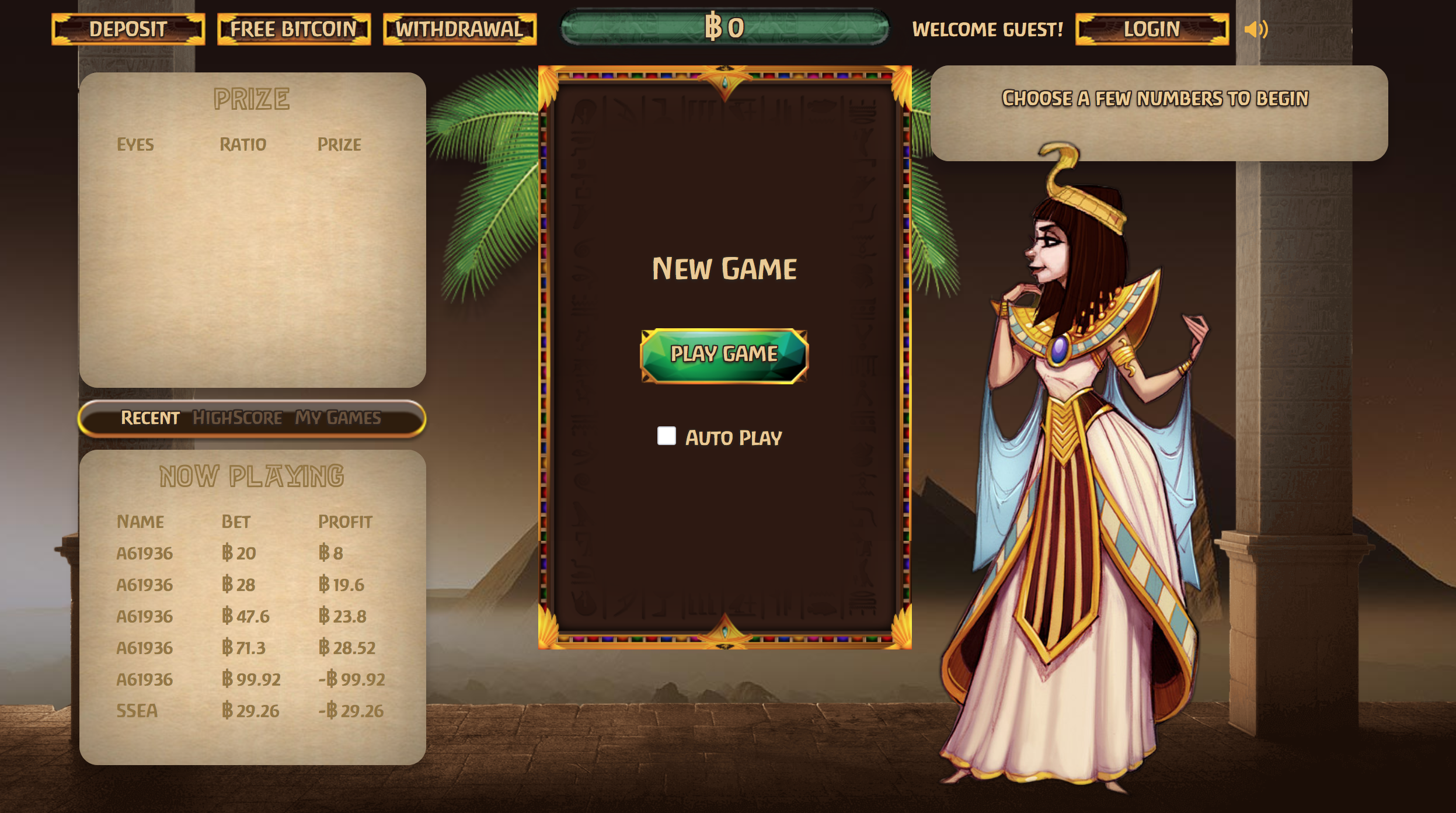 Since the interface does look great and keeps with the overall theme of ancient Egypt, it is easy to fall for the aesthetics and expect a great game to unfold within our very eyes – even if it gets to be just another rendition of the used, abused and reused Bitcoin dice game.

However, what is presented is unlike Bitcoin dice or even slots for that matter, but remains very similar in interface to BitKong, another game that once did the rounds of the Bitcoin gambling sector due to its unique and unprecedented nature.

However, unlike BitKong, where players have to start at the bottom row of the provided interface and move upwards with a minesweeper like probability, 36 Eyes needs its players to select anywhere from 1 to 35 tiles on its board of 36 tiles. Somewhere on the board, there are 6 “Eyes” that is hidden behind 6 of the tiles. If players hit one of these tiles, then they win according to the payout ratio that is shown to them, depending on the numbers that they selected.

Since the payout ratio changes with the combination of numbers, it is difficult to peg down exactly what your payout ratio will be until you have selected the numbers and you are ready to play the game to find the Eyes behind the tiles.

To its credit, 36 Eyes does try to explain exactly how would the game work for those who are willing to play it. 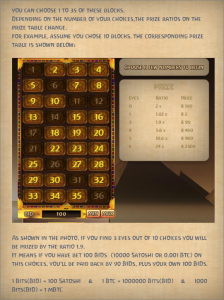 However, even after this explanation, the mathematics and probability of the game does not get to be as discernible as some of its other counterparts, which use methods that are far simpler for players to put their bet on.

And that is where 36 Eyes’ initial fault lies.

While experienced players would be able to understand the functionalities behind the execution of the game with some effort, an average player/casual gamer might not be able to give the game enough time to explain its complex nature, and thus they won’t bet their money on something which they do not understand in the first place.

How to Withdraw or Deposit Bitcoin on 36 Eyes

However, this takes away from the notion of anonymity in Bitcoin gambling, and that once again pushes 36 Eyes down the list of online gambling facilitators, since most people who gamble using Bitcoin only do so out of their need to keep their identity private, and if their social media account gets tied to such a site, then it defeats the whole purpose of using Bitcoin in the first place.

If users do decide to create an account using one of their social media profiles, then they are entitled to utilize the Affiliate and Faucet benefits that are provided by 36 Eyes.

In the affiliate program, if an existing player refers any new users to the site, then the referrer gets to receive 10% of all bets that are placed on the site by their referral.

Whereas, in the faucet program, if a registered user has an account balance of zero on the site for more than 24 hours, then they are awarded  2000 Satoshi units (0.00002000 Bitcoin).

The game does claim to be provably fair and has an indicator on the website where the hash and server seed can be entered to verify the authenticity of each generation. However, it does not elaborate separately on the nature of its provably fair mechanism. 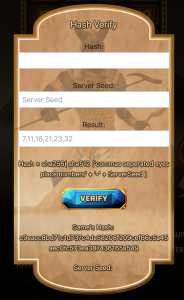 While visually pleasing, the 36 Eyes platform leaves a lot to be desired when it comes to execution and would leave a lot of its users thinking about the missed opportunity that would always come to their mind whenever they look at the game.

That being said, if you are an experienced gamer who can understand the game’s purpose and functionality with ease and have no issues in playing without an account or creating an account with one of your social media profiles, then you may certainly go ahead and try the services provided by 36 Eyes.

However, ensure that you only start playing with smaller amounts so you can test the service for yourself before you go ahead with trusting the site with a large amount of your Bitcoin.