It’s one of the leading Bitcoin sportsbook and casino websites around. There are a wide variety of activities to place bets. Live soccer/football matches, basketball, baseball, horse races, and more. Casino addicts aren’t left out. There is even a section for those in the financial world to place a bet on the market, be it in random commodities or global currency pairs. Another stunning advantage of the site is, they have virtual TV running, and you get to place a bet on live matches, or any other events in real time.

The slick and seamless system at 1xBit, loading quickly to get players up to speed on all bets. Also, for players who love to watch live events, they’ve got what is called the Multi-LIVE solution. On the Multi-LIVE page, players can add up to 4 online games and place bets on all of them. There’s no need to open multiple tabs. Players get to see four events happening at the same time.

A full list of activities you can bet upon on 1xBit include: 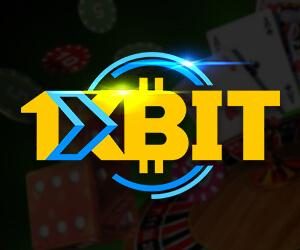 Registering at 1xBit is pretty easy and gives you a cool bonus of up to 100% of your deposit up to 1 BTC. As funny as it may sound, 1xBit offers a reward for losing. Ok, that’s not to say you should make losing a priority, they understand that there are days’ things just don’t go the way it should, so you can claim up to 0.5 Bitcoins from 20 straight losses.

1xBit has an active 24/7 customer support facility with representatives always there to attend to needs of gamers, that is if they are having troubles with one thing or the other regarding the site. You can be sure there is a quick response to your needs and also in multiple languages.

1xBit withdrawals and deposits are done in Bitcoin only. It’s for sure the ideal currency for people who want to keep their private information safe and anonymous. Instant deposits and quick withdrawals make the site a top choice. They also have fast and secure transactions through SSL; this means sensitive data are kept safe and encrypted as they are sent to and from on the internet. This ensures that you aren’t losing deposits and withdrawals.

With a broad range of gaming, casino, and sports, you always have a reason to be playing at 1xbit. The option for multiple languages is also very useful. We would like to see them add different cyrpto-currencies in the future (if they want to be a huge one stop shop), but a part from that we see only positives at this site.